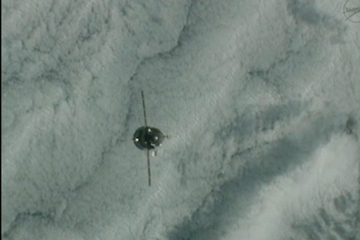 This still from a NASA broadcast shows the Russian Progress 46 spacecraft as it prepared to dock at the International Space Station on Jan. 27, 2012.

A robotic Russian cargo ship pulled up to the International Space Station Friday (Jan. 27), delivering tons of fresh fruit, clothing and other vital supplies for the orbiting lab's six-man crew.
The Progress 46 cargo ship arrived at the space station at about 7:09 p.m. EST (0009 GMT Jan. 28) after a two-day spaceflight that marked Russia's first space mission of the year. The supply ship launched from Baikonur Cosmodrome in Kazakhstan and docked with the space station as the two spacecraft sailed about 240 miles (386 kilometers) above the northeastern coast of Brazil.

The unmanned spacecraft is carrying about 2.9 tons of supplies for the space station's Expedition 30 crew, according to a NASA description. The cargo ship is packed with about 2,050 pounds (930 kilograms) of fuel, 110 pounds (50 kg) of oxygen and air, 926 pounds (420 kg) of water and 2,778 pounds (1,260 kg) of spare parts and experiment gear.
The space station is currently home to three astronauts and three cosmonauts. Three Russians, two Americans and one Dutch astronaut make up the Expedition 30 crew. The Russian cosmonauts stood ready to take remote control of Progress 46 in case the automated spacecraft veered off course, but the cargo ship parked itself flawlessly as planned.

Cargo vehicle Progress M-14M was launched from the Baikonur launch site in Kazakhstan to the International Space Station on January 26, 2012. The purpose of the launch is to support further in-orbit operation of the International Space Station (ISS) by delivering more than 2.6 tons of cargo to the station.
CREDIT: S.P. Korolev RSC "Energia"
Progress vehicles are disposable and are intentionally commanded to burn up in Earth's atmosphere at the end of their space missions. Russia's Federal Space Agency plans to launch several Progress vehicles this year to keep the station stocked with supplies.
Earlier this week, an older Progress spacecraft — Progress 45 —undocked from the space station's Earth-facing Pirs docking port to make room for the new supply ship. Progress 45 deployed a small, 88-pound (40-kg) microsatellite called Chibis-M before ending its mission with a fiery plunge toward Earth. The Chibis-M satellite is designed to study how plasma waves interact with Earth's ionosphere, NASA officials have said.
As the space station crewmembers prepare to unpack the Progress 46 cargo ship, NASA engineers at Mission Control in Houston are tracking a piece of Chinese space junk to determine if the space station will have to fire its thrusters to dodge the orbital trash.
The space junk is a piece of debris from China's Fengyun 1C weather satellite, which was destroyed in 2007 during a Chinese anti-satellite test. There are seven "opportunities for the debris to make a close approach to the station," NASA officials said.
If a dodging maneuver is required, the space station would likely perform the move on Saturday (Jan. 28) at 6:50 p.m. EST (2150 GMT).
Meanwhile, Russian space station officials are discussing a potential launch delay for the next crewed Soyuz capsule bound for the orbiting lab. That Soyuz spacecraft was slated to blast off with three new station crewmembers on March 29, but a recent pressurization test revealed cracks in the vehicle's crew capsule.
Russian spacecraft engineers plan to replace the crew module and work to determine why it failed the pressurization test, which was designed to check whether it was airtight and fit for spaceflight.
Source : http://www.space.com