Declassified US Spy Satellites from Cold War Land in Ohio 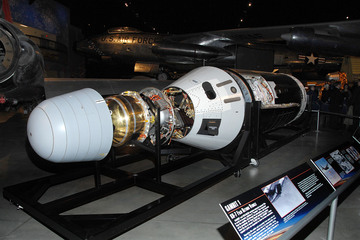 Gambit 1 KH-7 is one of three formerly classified reconnaissance satellites that went on display at the National Museum of the U.S. Air Force in Dayton, Ohio, starting Jan. 26, 2012.
CREDIT: U.S. Air Force

A trio of once-secret U.S. spy satellites built to look down on the Soviet Union were unveiled in Ohio this week in a rare public display by the United States Air Force.
The vintage reconnaissance satellites joined the Cold War Gallery at the National Museum of the U.S. Air Force in Dayton, Ohio, on Thursday (Jan. 26), and will eventually be installed in a new wing for space relics and other aircraft. The satellites — called KH-7 Gambit 1, the KH-8 Gambit 3 and the KH-9 Hexagon — were officially declassified in September by the National Reconnaissance Office and released for public viewing.

"Last year the NRO celebrated its 50th anniversary, and we announced the declassification of two NRO systems, Gambit and Hexagon, which were America's eyes in space and the most sophisticated satellites of their time," NRO director Air Force Gen. (Ret.) Bruce Carlson said in a statement. "These systems were critical for monitoring key targets in the USSR and around the globe and provided much-needed cartographic information to the DOD to produce accurate, large-scale maps."
The Gambit and Hexagon satellites followed the NRO's iconic Corona spy satellite program, which was declassified in 1995.

Giant HEXAGON Spy Satellite RevealedCredit: Roger Guillemette/SPACE.comThe massive KH-9 Hexagon spy satellite on display at the Smithsonian National Air & Space Museum's Udvar-Hazy Center, after being declassified on Sept. 17, 2011. Longer than a school bus at 60 feet in length and weighing 30,000 pounds at launch, 20 KH-9 Hexagons were launched by the National Reconnaissance Office between 1971 and 1986.

HEXAGON Spy Satellite Builder Credit: Roger Guillemette/SPACE.comPhil Pressel, one of the developers of the KH-9 Hexagon's panoramic camera system, proudly points out some of the spacecraft's once highly-classified features, a life's work that he had been unable to discuss publicly until the NRO's Sept. 17, 2011 declassification of the massive spy satellite.

HEXAGON Spy Satellite: Rear ViewCredit: Roger Guillemette/SPACE.comA rear view of the massive KH-9 Hexagon spy satellite on display at the Smithsonian National Air & Space Museum's Udvar-Hazy Center, after being declassified on Sept. 17, 2011. Often referred to as "Big Bird," the KH-9 Hexagons were the largest spacecraft ever launched from California's Vandenberg AFB, each as big as a school bus, 60 feet in length and weighing 30,000 pounds at launch. Twenty KH-9 Hexagons were launched by the National Reconnaissance Office between 1971 and 1986.   More photos :