What is a Weather satellite ? 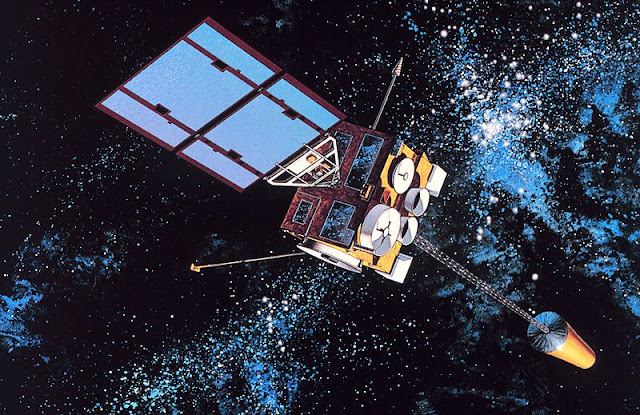 The weather satellite is a type of satellite that is primarily used to monitor the weather and climate of the Earth. Satellites can be either polar orbiting, seeing the same swath of the Earth every 12 hours, or geostationary, hovering over the same spot on Earth by orbiting over the equator while moving at the speed of the Earth's rotation. These meteorological satellites, however, see more than clouds and cloud systems.


City lights, fires, effects of pollution, auroras, sand and dust storms, snow cover, ice mapping, boundaries of ocean currents, energy flows, etc., and other types of environmental information are collected using weather satellites. Weather satellite images helped in monitoring the volcanic ash cloud from Mount St. Helens and activity from other volcanoes such as Mount Etna. Smoke from fires in the western United States such as Colorado and Utah have also been monitored. 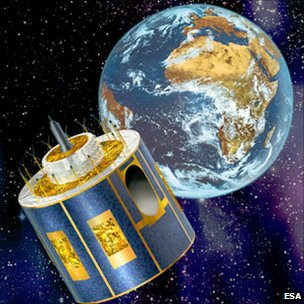 Other environmental satellites can detect changes in the Earth's vegetation, sea state, ocean color, and ice fields. For example, the 2002 oil spill off the northwest coast of Spain was watched carefully by the European ENVISAT, which, though not a weather satellite, flies an instrument (ASAR) which can see changes in the sea surface.
El Niño and its effects on weather are monitored daily from satellite images. The Antarctic ozone hole is mapped from weather satellite data. Collectively, weather satellites flown by the U.S., Europe, India, China, Russia, and Japan provide nearly continuous observations for a global weather watch. 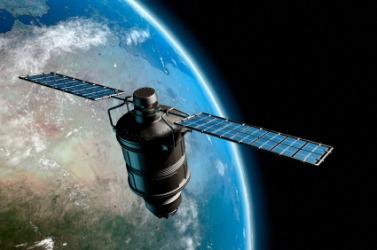 History
The first weather satellite, Vanguard 2, was launched on February 17, 1959. It was designed to measure cloud cover and resistance, but a poor axis of rotation kept it from collecting a notable amount of useful data.
The first weather satellite to be considered a success was TIROS-1, launched by NASA on April 1, 1960. TIROS operated for 78 days and proved to be much more successful than Vanguard 2. TIROS paved the way for the Nimbus program, whose technology and findings are the heritage of most of the Earth-observing satellites NASA and NOAA have launched since then. 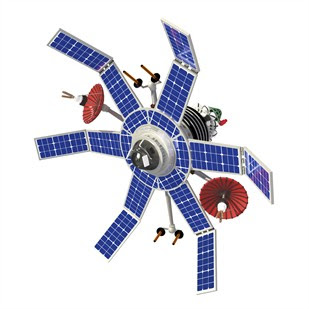 Visible spectrum
Visible-light images from weather satellites during local daylight hours are easy to interpret even by the average person; clouds, cloud systems such as fronts and tropical storms, lakes, forests, mountains, snow ice, fires, and pollution such as smoke, smog, dust and haze are readily apparent. Even wind can be determined by cloud patterns, alignments and movement from successive photos.

The thermal or infrared images recorded by sensors called scanning radiometers enable a trained analyst to determine cloud heights and types, to calculate land and surface water temperatures, and to locate ocean surface features. Infrared satellite imagery can be used effectively for tropical cyclones with a visible eye pattern, using the Dvorak technique, where the difference between the temperature of the warm eye and the surrounding cold cloud tops can be used to determine its intensity (colder cloud tops generally indicate a more intense storm).Infrared pictures depict ocean eddies or vortices and map currents such as the Gulf Stream which are valuable to the shipping industry. 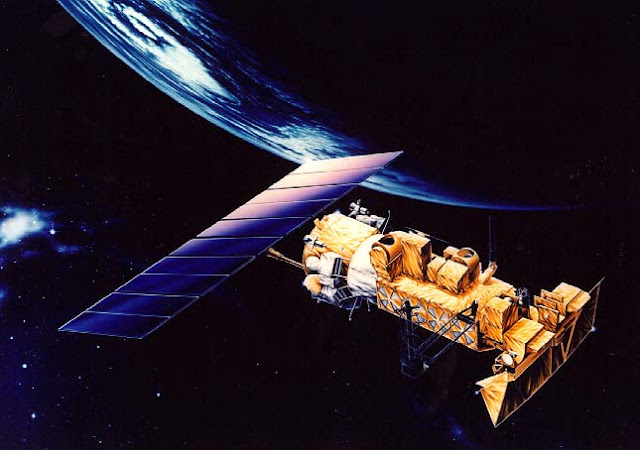 Fishermen and farmers are interested in knowing land and water temperatures to protect their crops against frost or increase their catch from the sea. Even El Niño phenomena can be spotted. Using color-digitized techniques, the gray shaded thermal images can be converted to color for easier identification of desired information.

Image from the GOES-9 weather satellite of Hurricane Felix.

There are two basic types of meteorological satellites: geostationary and polar orbiting.

"geostationary meteorological satellite" redirects here. For the Japanese satellites called "Geostationary Meteorological Satellite", see Himawari (satellite).
Geostationary weather satellites orbit the Earth above the equator at altitudes of 35,880 km (22,300 miles). Because of this orbit, they remain stationary with respect to the rotating Earth and thus can record or transmit images of the entire hemisphere below continuously with their visible-light and infrared sensors. The news media use the geostationary photos in their daily weather presentation as single images or made into movie loops. These are also available on the city forecast pages of noaa.gov (example Dallas, TX).
Several geostationary meteorological spacecraft are in operation. The United States has two in operation; GOES-11 and GOES-12. GOES-12, designated GOES-East, is located over the Amazon River and provides most of the U.S. weather information. GOES-11 is GOES-West over the eastern Pacific Ocean. Russia's new-generation weather satellite Elektro-L 1 operates at 76°E over the Indian Ocean. The Japanese have one in operation; MTSAT-1R over the mid Pacific at 140°E. The Europeans have Meteosat-8 (3.5°W) and Meteosat-9 (0°) over the Atlantic Ocean and have Meteosat-6 (63°E) and Meteosat-7 (57.5°E) over the Indian Ocean. India also operates geostationary satellites called INSAT which carry instruments for meteorological purposes. China operated the Feng-Yun（風雲) geostationary satellites FY-2D at 86.5°E and FY-2E at 123.5°E, which are no longer in use. 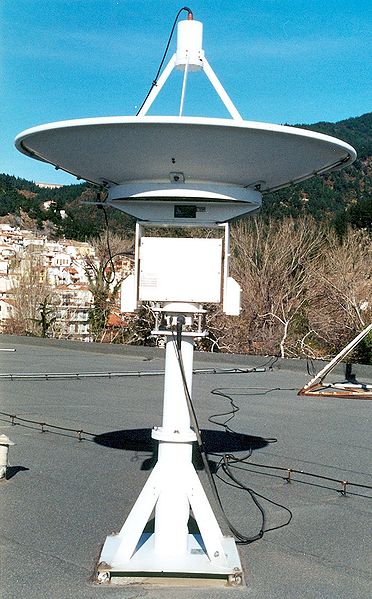 Computer controlled motorized parabolic dish antenna for tracking
LEO weather satellites.
Polar orbiting weather satellites circle the Earth at a typical altitude of 850 km (530 miles) in a north to south (or vice versa) path, passing over the poles in their continuous flight. Polar satellites are in sun-synchronous orbits, which means they are able to observe any place on Earth and will view every location twice each day with the same general lighting conditions due to the near-constant local solar time. Polar orbiting weather satellites offer a much better resolution than their geostationary counterparts due their closeness to the Earth.
The United States has the NOAA series of polar orbiting meteorological satellites, presently NOAA 17 and NOAA 18 as primary spacecraft, NOAA 15 and NOAA 16 as secondary spacecraft, NOAA 14 in standby, and NOAA 12. Europe has the Metop-A satellite. Russia has the Meteor and RESURS series of satellites. China has FY-1D and FY-3A. India has polar orbiting satellites as well. 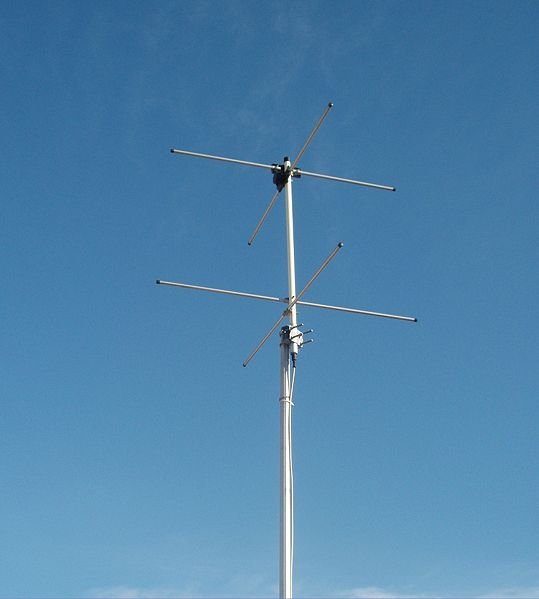 The United States Department of Defense's Meteorological Satellite (DMSP) can "see" the best of all weather vehicles with its ability to detect objects almost as 'small' as a huge oil tanker. In addition, of all the weather satellites in orbit, only DMSP can "see" at night in the visual. Some of the most spectacular photos have been recorded by the night visual sensor; city lights, volcanoes, fires, lightning, meteors, oil field burn-offs, as well as the Aurora Borealis and Aurora Australis have been captured by this 450-mile-high space vehicle's low moonlight sensor. 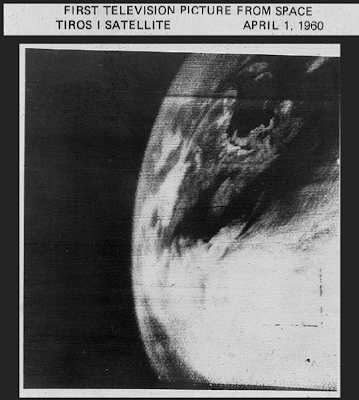 At the same time, energy monitoring as well as city growth can be accomplished since both major and even minor cities, as well as highway lights, are conspicuous. This informs astronomers of light pollution. The New York City Blackout of 1977 was captured by one of the night orbiter DMSP space vehicles.
In addition to monitoring city lights, these photos are a life saving asset in the detection and monitoring of fires. Not only do the satellites see the fires visually day and night, but the thermal and infrared scanners on board these weather satellites detect potential fire sources below the surface of the Earth where smoldering occurs. Once the fire is detected, the same weather satellites provide vital information about wind that could fan or spread the fires. These same cloud photos from space tell the firefighter when it will rain.
Dramatic photos are provided by all the weather satellites, but even more definitive were the DMSP night visible-light pictures of the 700 oil well fires that Iraq started on February 23, 1991 as they fled Kuwait. These fires were vividly illustrated as huge flashes in the night photos, far outstripping the glow of large populated areas. The fires consumed millions of gallons of oil; the last was doused on November 6.


Source : From Wikipedia, the free encyclopedia

This work by http://1001bestwp.blogspot.de/ is licensed under a Creative Commons Attribution-NonCommercial-NoDerivs 3.0 Unported License.
This site and its content are free of charge and therefore the site's owner does not gain any financial benefit from the display and / or download of any of images displayed.
1001Best Wallpapers is Part of 1001Archives.

The content is strictly copyrighted to the Admin and may not be reproduced without permission.