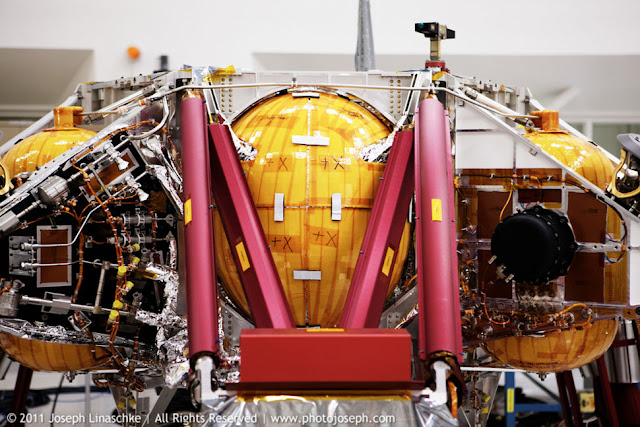 [photo, above: MSL's descent stage, which files the rover down to Mars' surface using eight rockets, and lowers it on a tether for landing. The orange spheres are propellant tanks.]

This week, Boing Boing was invited to visit NASA's Jet Propulsion Laboratory for the first and only opportunity for media to enter the Pasadena, CA clean room where NASA's next Mars rover, Curiosity, and other components of the Mars Science Laboratory spacecraft have been built for launch in late 2011 from Florida.
Shipment from the clean room to Florida will begin next month. Curiosity rover recently completed tests under simulated space and Mars-surface environmental conditions in another building and is back in the Spacecraft Assembly Facility at NASA's Jet Propulsion Laboratory for other tests. Spacecraft assembly and testing specialists showed Boing Boing the rover and the other spacecraft components, including the descent stage "sky crane."
Photographer Joseph Linaschke visited on behalf of Boing Boing (he donned a bunny suit for the occasion) and shot this series of photos. More below.
Captions for Boing Boing by Ashwin Vasavada, a scientist with the NASA JPL MSL program. [photo, above: MSL's 4.5-meter aeroshell that encapsulates the rover and descent stage during cruise to Mars and its entry into Mars' upper atmosphere. The upper cage will hold the parachute.] The Curiosity rover on a support stand. Each wheel is 50 cm in diameter. The 2-meter robot arm and instrument turret are visible on the left. Visitors look into the clean room at JPL that currently holds nearly all of the MSL flight hardware, including the rover, descent stage, cruise stage, and aeroshell. These components were assembled in the clean room and continue to undergo testing there Close-up of the clean room floor showing the descent stage (left), cruise stage (middle), and aeroshell (right). The technicians all wear special uniforms ("bunny suits") to both protect the spacecraft components from contamination and avoid electrostatic discharges that would harm spacecraft electronics.] [The Curiosity rover, showing the location of the radioisotope thermoelectric generator (RTG) on the rear of the rover that provides both electrical power and heat to enable the rover's operation and survival on Mars. Pipes visible along the sides of the RTG use fluid to transport heat into the rover body.] [Curiosity's deck, showing the mast (left), high-gain antenna (right), and UHF antenna (gray unit in the far left). At the top of the mast is a telescope used to focus a laser on rocks and soils up to 20 feet away for chemical analysis. Just below the telescope, the medium-angle and telephoto lenses of the rover's primary science cameras are visible as two squares of different sizes. On the outsides of those are the rover's four navigation cameras. Only two are used at any time, with the other two serving as spares.] [Detail of the rover's suspension system and high-gain antenna (center-right, on the deck).] The MSL cruise stage. The cruise stage provides solar power, thrusters for navigation, and heat exchangers to the rover during its flight from Earth to Mars. The side-facing heat exchange panels have a protective covering in this image. [Detail of the MSL descent stage. The gray disk in the upper left contains small rocket thrusters that will help steer the spacecraft during its entry into Mars' atmosphere. The orange spheres are propellant tanks.] Underside of the MSL descent stage. One of the eight rocket nozzles is visible on the left, enclosed in a protective cage. [Close-up of two of the rocket nozzles on the descent stage. The gold-colored parts are the rocket throttle valves.] Detail of propellant lines on the MSL descent stage [ The Curiosity rover on a support stand. Each wheel is 50 cm in diameter. The 2-meter robot arm and instrument turret are visible on the left.] [ Detail of the MSL aeroshell on its support stand.] [Rear of the Curiosity rover showing the radioisotope thermoelectric generator that supplies electrical power and heat to the rover.] [Close-up of the MSL descent stage showing four of the eight rockets (in protective cages) that will fly the rover down to the surface of Mars.] [Close-up of the MSL descent stage showing two small thrusters (inside the gray disk) that will help steer the spacecraft during its entry into Mars' atmosphere.] [Curiosity's wheels. Each wheel is made from black-anodized aluminum and is 50 cm in diameter. Curiosity's wheels and suspension system are designed to take the impact of landing and to allow the rover to traverse sandy and rocky terrain.] [Close-up of MSL's descent stage. The orange spheres are propellant tanks. The black-colored unit measures accelerations with high precision in order to control the descent.] [Detail of the side of the Curiosity rover showing its suspension and electronics cabling.] [Close-up of one of the rover's six wheels. The spokes help contain the impact of landing and driving over rough terrain.] [Detail of the rover's suspension system and high-gain antenna (center-right, on the deck).]

Source : http://www.msnbc.msn.com
About the photographer:
Joseph Linaschke is a photographic storyteller and educator, and runs ApertureExpert.com, a leading site for Apple Aperture users. He has traveled the world representing various technologies and companies on stage, including MetaCreations, Wacom, Corel, and Apple, where he was part of the marketing team for Aperture and produced and shot several productions for iLife, Aperture and Final Cut Studio.
You can purchase prints of any images in Joseph's JPL Mars Curiosity Rover photo gallery here.