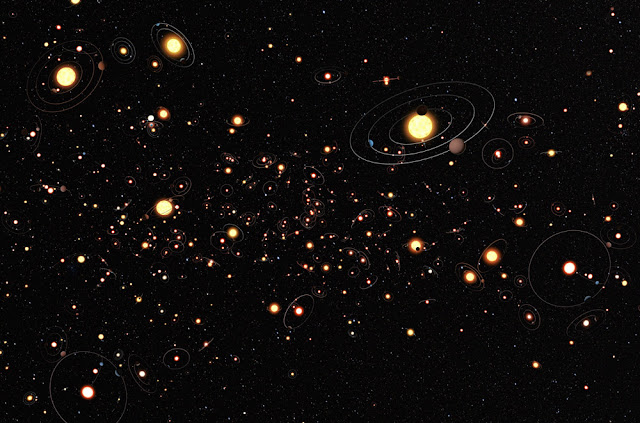 his artist's illustration gives an impression of how common planets are around the stars in the Milky Way. The planets, their orbits, and their host stars are all vastly magnified compared to their real separations. A six-year search that surveyed millions of stars using the microlensing technique concluded that planets around stars are the rule rather than the exception. The average number of planets per star is greater than one.
Image Type: Artwork 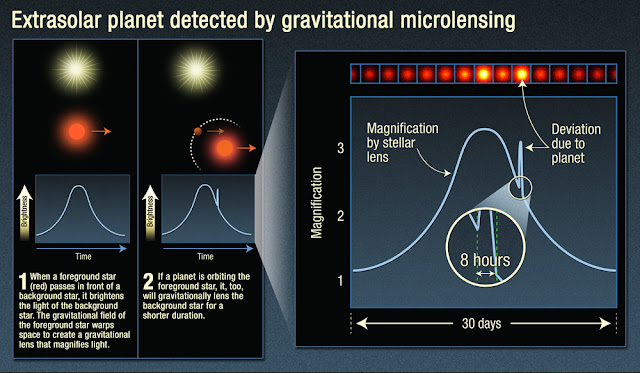 Our Milky Way galaxy contains a minimum of 100 billion planets according to a detailed statistical study based on the detection of three extrasolar planets by an observational technique called microlensing.
Kailash Sahu, of the Space Telescope Science Institute in Baltimore, Md., is part of an international team reporting today that our galaxy contains a minimum of one planet for every star on average. This means that there is likely to be a minimum of 1,500 planets within just 50 light-years of Earth.
The results are based on observations taken over six years by the PLANET (Probing Lensing Anomalies NETwork) collaboration, which Sahu co-founded in 1995. The study concludes that there are far more Earth-sized planets than bloated Jupiter-sized worlds. This is based on calibrating a planetary mass function that shows the number of planets increases for lower mass worlds. A rough estimate from this survey would point to the existence of more than 10 billion terrestrial planets across our galaxy.
The results are being published in the January 12 issue of the British science journal Nature.
The team's conclusions are gleaned from a planet search technique called microlensing. The technique takes advantage of the random motions of stars, which are generally too small to be noticed. If one star passes precisely in front of another star, the gravity of the foreground star bends the light from the background star.
This means that the foreground star acts like a giant lens amplifying the light from the background star. A planetary companion around the foreground star can produce additional brightening of the background star. This additional brightening reveals the planet, which is otherwise too faint to be seen by telescopes.
The higher the mass of the "lensing" star, the longer is the duration of the microlensing event. Typical microlensing events due to a star last about a month. But the extra brightening due to a planet typically lasts a few hours to a couple of days.
Using the microlensing technique, astronomers can determine a planet's mass. This method, however, does not reveal any clues about the world's composition.
Unlike other prominent planet-detection techniques, which measure the shadows of planets passing in front of their stars (transit) or measure the wobble of a star due to the gravitational tug of a planet (radial velocity and astrometry), the gravitational-lensing technique is unbiased in the selection of the host star.
The other techniques work best for finding planets close to their stars with short orbital periods. But microlensing can detect a planet that is as far from its star as Saturn is from our Sun, or as close as Mercury is to our Sun. The technique is also sensitive to detecting planets as small as Mercury.
Wide-field survey campaigns such as OGLE (Optical Gravitational Lensing Experiment) and MOA (Microlensing Observations in Astrophysics) cover millions of stars every clear night in order to identify and alert stellar microlensing events as early as possible. Follow-up collaborations, such as PLANET, monitor selected candidates more frequently, 24 hours a day, using a round-the-world network of telescopes.
Of the approximately 40 microlensing events closely monitored, three showed evidence for exoplanets. Using a statistical analysis, the team found that one in six stars hosts a Jupiter-mass planet. What's more, half of the stars have Neptune-mass planets, and two-thirds of the stars have Earth-mass planets. Therefore, low-mass planets are more abundant than their massive counterparts.
"This means, statistically, every star in the galaxy should have at least one planet, and probably more," said Sahu.
"Results from the three main techniques of planet detection are rapidly converging to a common result: Not only are planets common in the galaxy, but there are more small planets than large ones," said Stephen Kane, a co-author from NASA's Exoplanet Science Institute at the California Institute of Technology, Pasadena, Calif. "This is encouraging news for investigations into habitable planets."
These results are independent from a gravitational-lens survey led by Takahiro Sumi of Osaka University in Japan, which estimates there are hundreds of billions of planets with orbits larger than Saturn's orbit, or are free-floating throughout the galaxy.