Hubble Solves Mystery on Source of Supernova in Nearby Galaxy 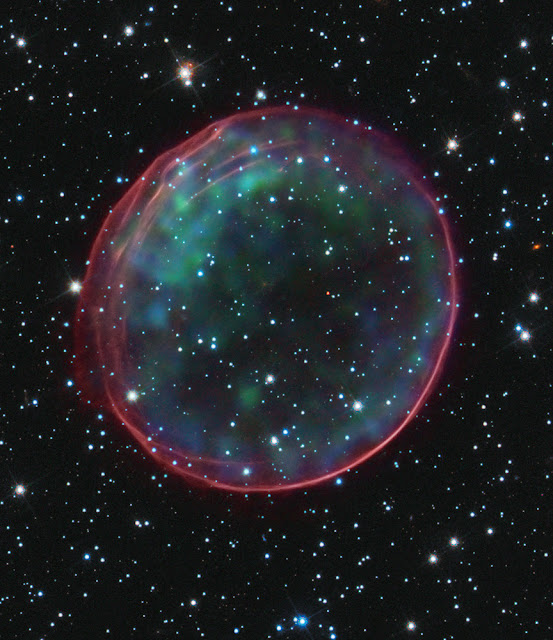 Using NASA's Hubble Space Telescope, astronomers have solved a longstanding mystery on the type of star, or so-called progenitor, that caused a supernova in a nearby galaxy. The finding yields new observational data for pinpointing one of several scenarios that could trigger such outbursts.
Based on previous observations from ground-based telescopes, astronomers knew that a kind of supernova called a Type Ia created a remnant named SNR 0509-67.5, which lies 170,000 light-years away in the Large Magellanic Cloud galaxy. 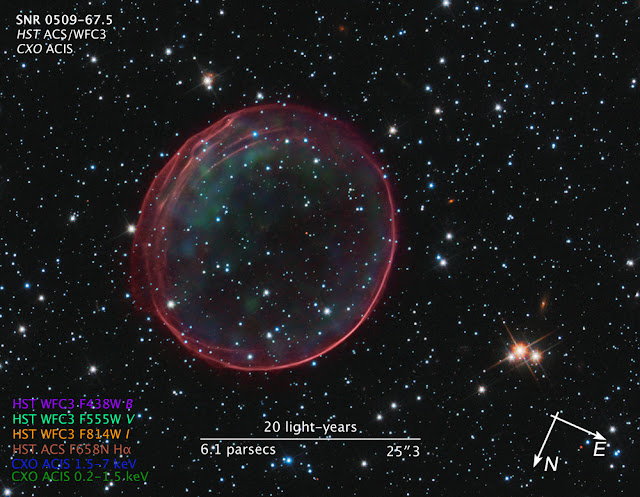 The type of system that leads to this kind of supernova explosion has long been a high importance problem with various proposed solutions but no decisive answer. All these solutions involve a white dwarf star that somehow increases in mass to the highest limit. Astronomers failed to find any companion star near the center of the remnant, and this rules out all but one solution, so the only remaining possibility is that this one Type Ia supernova came from a pair of white dwarfs in close orbit.

"We know that Hubble has the sensitivity necessary to detect the faintest white dwarf remnants that could have caused such explosions," said lead investigator Bradley Schaefer of Louisiana State University (LSU) in Baton Rouge. "The logic here is the same as the famous quote from Sherlock Holmes: 'When you have eliminated the impossible, whatever remains, however improbable, must be the truth.'"
The cause of SNR 0509-67.5 can best be explained by two tightly orbiting white dwarf stars spiraling closer and closer until they collided and exploded.
These results are being reported today at the meeting of the American Astronomical Society in Austin, Texas. A paper on the results will be published in the January 12 issue of the science journal Nature.
For four decades the search for Type Ia supernovae stellar progenitors has been a key question in astrophysics. The problem has taken on special importance over the last decade with Type Ia supernovae being the premier tools for measuring the accelerating universe.
Type Ia supernovae are tremendous explosions of energy in which the light produced is often brighter than a whole galaxy of stars. The problem has been to identify the type of star system that pushes the white dwarf's mass over the edge and triggers this type of explosion. Many possibilities have been suggested, but most require that a companion star near the exploding white dwarf be left behind after the explosion.
Therefore, a possible way to distinguish between the various progenitor models has been to look deep in the center of an old supernova remnant to search for the ex-companion star.
In 2010, Schaefer and Ashley Pagnotta of LSU were preparing a proposal to look for any faint ex-companion stars in the center of four supernova remnants in the Large Magellanic Cloud when they discovered that the Hubble Space Telescope had already taken the desired image of one of their target remnants, SNR 0509-67.5, for the Hubble Heritage program, which collects images of especially photogenic astronomical targets.
In analyzing the central region they found it to be completely empty of stars down to the limit of the faintest objects that Hubble can detect in the photos. Schaefer reports that the best explanation left is the so-called "double degenerate model" in which two white dwarfs collide.
There are no recorded observations of the star exploding. However, researchers at the Space Telescope Science Institute in Baltimore, Md., have identified light from the supernova that was reflected off of interstellar dust, delaying its arrival at Earth by 400 years. This delay, called a light echo, of the supernova explosion also allowed the astronomers to measure the spectral signature of the light from the explosion. By virtue of the color signature, astronomers were able to deduce it was a Type Ia supernova.
Because the remnant appears as a nice symmetric shell or bubble, the geometric center can be accurately determined. These properties make SNR 0509-67.5 an ideal target to search for ex-companions. The young age also means that any surviving stars have not moved far from the site of the explosion.
The team plans to look at other supernova remnants in the Large Magellanic Cloud to further test their observations.