NASA Finds Lost Spacecraft on Dark Side of the Moon 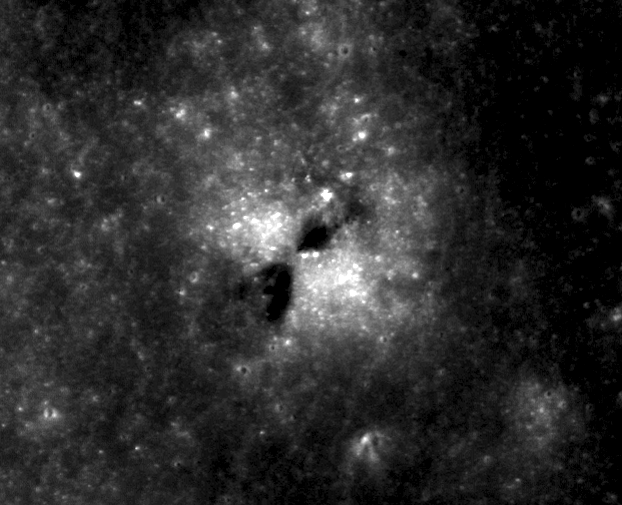 Photo via NASA
NASA scientists have found the crash site, pictured above, of a spacecraft set into orbit during the early 60s. This one–thankfully–is not crawling with Decepticons. They believe it is the missing Lunar Orbiter 2 which disappeared back in 1967 during a passage over the far side of the moon, when the craft went out of telescope and radio range.
Lunar Orbit 2′s primary function was documenting areas of the moon that would be most hospitable to the Apollo and Surveyor missions. During its run, it returned a total of 609 high resolution images and 208 medium-sized frames. This includes the Copernicus crater (pictured below) which is considered by many to be the Picture of the Century.

While the spacecraft was intentionally downed on October 11, 1967, scientists had yet to find the crash site–til now.
The wreckage is thought to have been located by the Lunar Reconnaissance Orbiter (LRO) which is currently mapping the lunar surface in unprecedented detail. During its mission so far, the spacecraft has gathered more than 192 terabytes of data; that’s nearly 41,000 DVDs worth of data, images and maps! One of its key findings is our solar system’s coldest spot: a crater near the moon’s north pole was recorded at minus 415 degrees Fahrenheit. Brrr!
Some of the images LRO has captured can be seen below, but you can also find more here.
Follow me @jerryjamesstone or friend me on Facebook.