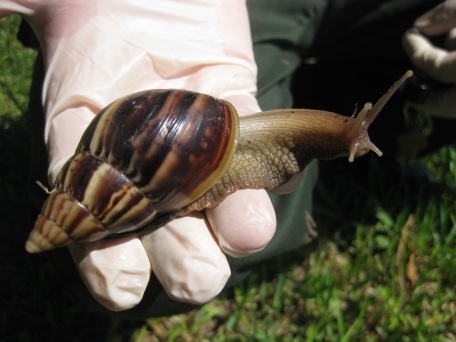 Not only are these huge, hermaphroditic, long living tough buggers so hungry they eat plaster and stucco they can carry meningitis bearing nematodes. This is the first time I’ve used the Florida Dept of Agriculture as a source.
Achatina fulica is originally from East Africa. Each snail can live as long as nine years. In a typical year, every mated adult lays about 1,200 eggs. Photo Credit: Andrew Derksen, Florida Cooperative Pest Survey Program
Florida Department of Agriculture and Consumer Services Identifies Giant African Land Snails in Miami-Dade County

Tallahassee, FL – The Florida Department of Agriculture and Consumer Services has positively identified a population of Giant African land snails (GALS) in Miami-Dade County. The Giant African land snail is one of the most damaging snails in the world because they consume at least 500 different types of plants, can cause structural damage to plaster and stucco, and can carry a parasitic nematode that can lead to meningitis in humans.
“Florida faces constant challenges from invasive pests and diseases that arrive through cargo, travelers’ luggage, air currents, and plant and animal agricultural products,” said Agriculture Commissioner Adam Putnam. “Enlisting the help of the public in the early detection of these pests and diseases is critical to containing and ultimately eradicating them in our state.”

The Giant African land snail, Achatina fulica, is one of the largest land snails in the world, growing up to eight inches in length and more than four inches in diameter. When full grown, the snail’s brownish shell consists of seven to nine whorls (spirals) that cover at least half the length of its long and greatly swollen body whorl.
Each snail can live as long as nine years and contains both female and male reproductive organs. After a single mating session, each snail can produce 100 to 400 eggs. In a typical year, every mated adult lays about 1,200 eggs.
Achatina fulica is originally from East Africa and has established itself throughout the Indo-Pacific Basin, including the Hawaiian Islands. This pest has also been introduced into the Caribbean islands of Martinique and Guadeloupe with recent detections in Saint Lucia and Barbados.
The last reported outbreak and eradication of the Giant African land snail in Florida occurred in 1966 when a boy smuggled three Giant African land snails into Miami as pets. The boy’s grandmother released the snails into her garden and seven years later, more than 18,000 snails were found costing more than $1 million and taking an additional 10 years to successfully eradicate this pest from Florida. This is the only known successful giant African land snail eradication program.

Giant African land snails are illegal to import into the United States without a permit and currently no permits have been issued.
Anyone who believes they may have seen a Giant African land snail or signs of its presence should call the Department of Agriculture and Consumer Services toll-free at 888-397-1517 to make arrangements to have the snail collected.
To preserve the snail sample, Floridians should use gloves to put the snail in a zip lock bag, seal it and place it in a bucket or plastic container. They are advised not to release or give these samples away.
For more information on invasive snail species, visit: www.freshfromflorida.com.