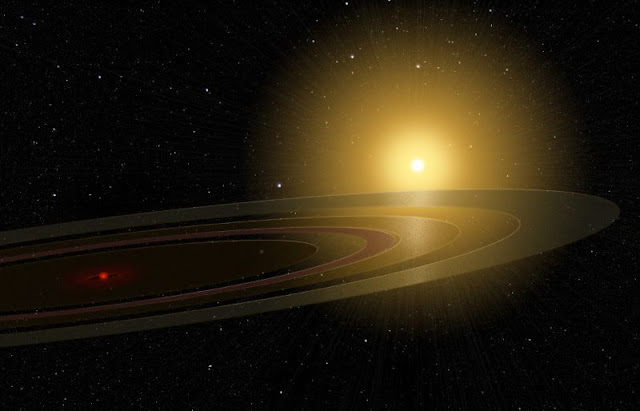 AUSTIN, Texas – An enigmatic object detected five years ago in space may be a ringed alien world comparable to Saturn, the first such world discovered outside our solar system, scientists now say.


The finding, announced here yesterday (Jan. 11) at the 219th meeting of the American Astronomical Society, came from studying an unsteady eclipse of light from a star near the mysterious body.
"After we ruled out the eclipse being due to a spherical star or a circumstellar disk passing in front of the star, I realized that the only plausible explanation was some sort of dust ring system orbiting a smaller companion — basically a Saturn on steroids," said study co-author Eric Mamajek of Cerro Tololo Inter-American Observatory in Chile and the University of Rochester.
The find occurred as astrophysicists investigated the Scorpius-Centaurus association, the nearest region of recent massive star formation to the sun, using the international SuperWASP (Wide Angle Search for Planets) and All Sky Automated Survey (ASAS) projects. Specifically, the researchers analyzed how light from sunlike stars in Scorpius-Centaurus varied over time.