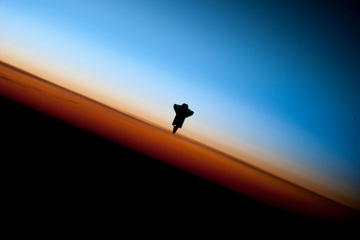 In a very unique setting over Earth's colorful horizon, the silhouette of the space shuttle Endeavour is featured in this image photographed by an Expedition 22 crewmember prior to STS-130 rendezvous and docking operations with the International Space Station. Docking occurred at 12:06 p.m. (EST) on Feb. 10, 2010.
CREDIT: NASA

by Clara Moskowitz, SPACE.com Assistant Managing Editor
NASA's reusable spaceship has had countless photogenic moments over the years. In fact, the iconic space shuttle can hardly take a bad picture.
While the list of best shuttle photos could go on forever, here are 10 stunning pictures that we thought stood out from the space shuttle's 30-year run as NASA prepares for the program's final countdown on July 8:

Of the countless gorgeous space shuttle launch photos taken over the years, this one is especially jaw-dropping. The angle and glare of the shuttle's flames helps communicate what 375,000 pounds of thrust actually looks like. Here the space shuttle Atlantis is lifting off on its STS-27 mission on Dec. 2, 1988. Credit: NASA

The space shuttle Endeavour glides back to Earth on Jan. 20, 1996, after nine days in space on the STS-72 mission. The orbiter is to touch down on Runway 15 at the Shuttle Landing Facility at NASA's Kennedy Space Center in Cape Canaveral, Fla. Credit: NASA

The moon is framed between the shuttle Discovery and the Earth during the STS-95 mission in 1998. Here we see the back of the orbiter, with its Orbital Maneuvering System (OMS) engine pod and tail visible, as it passes over the Atlantic Ocean. Credit: NASA

Astronaut Dale A. Gardner holds up a "For Sale" sign as a joke, pretending to offer up two failed satellites, Palapa B-2 and Westar 6, which were retrieved in space during the shuttle Discovery's STS-51A mission in 1984. Astronaut Joseph P. Allen IV can be seen reflected in Gardner's helmet visor. Credit: NASA

One of the space shuttle's finest moments came when astronauts successfully fixed a disappointing optics failure that plagued the Hubble Space Telescope after it was launched.[Most Amazing Hubble Discoveries]
In this photo, astronauts F. Story Musgrave, anchored on the end of the shuttle's robotic arm, and Jeffrey A. Hoffman inside the orbiter's payload bay, conduct the fifth and final spacewalk to fix Hubble during the shuttle Endeavour's 1993 servicing mission to the orbiting observatory. Credit: NASA

The globe of Earth is visible beneath a starburst of light from the sun, with the space shuttle's robotic arm floating on the top right. This photo was taken during the STS-77 mission of the shuttle Endeavour in 1996. Credit: NASA

While the sight of a shuttle launch is spectacular from the ground, some of the most amazing launch photos have come from those also in the air.
Here the space shuttle Columbia launches on its STS-52 mission from Kennedy Space Center's Launch Pad 39B on Oct. 22, 1992. The picture was taken by astronaut Steven R. Nagel, who was flying over the Florida spaceport in a Shuttle Training Aircraft, which is a modified Gulfstream jet. Credit: NASA

Astronaut Clayton Anderson floats on the middeck of space shuttle Discovery during the STS-131 mission in April 2010. In front of him is a water bubble that reflects an upside-down image of the spaceflyer because the light has been refracted. Credit: NASA

This gorgeous starry-sky photo was taken during the space shuttle Endeavour's final mission before retirement, the STS-134 flight. The picture, snapped by astronauts inside the International Space Station, shows the orbiter docked to the outpost on May 28, 2011. Credit: NASA

The space shuttle Discovery stands ready for liftoff at Launch Pad 39A at NASA's Kennedy Space Center in Cape Canaveral, Fla. Behind the shuttle, a nearly full moon sets. Discovery is poised to launch on the STS-119 mission in March 2009. Credit: NASA/Bill Ingalls
NASA's first space shuttle mission launched on April 12, 1981 and by the end of the program, the agency will have flown 135 shuttle flights in just over 30 years.
The final shuttle flight will be STS-135 aboard the shuttle Atlantis, which NASA plans to launch on July 8 to deliver spare parts and other vital supplies to the International Space Station. The delivery mission will help prepare the space station to keep flying after the shuttle fleet retires for good.
Next: 9 Weird Things That Flew on NASA's Space Shuttles
Visit SPACE.com for complete coverage of Atlantis's final mission STS-135 or us @Spacedotcom and on Facebook.

Clara has been SPACE.com's Assistant Managing Editor since 2011, and has been writing for SPACE.com and LiveScience since 2008. Clara has a bachelor's degree in astronomy and physics from Wesleyan University, and a graduate certificate in science writing from the University of California, Santa Cruz.