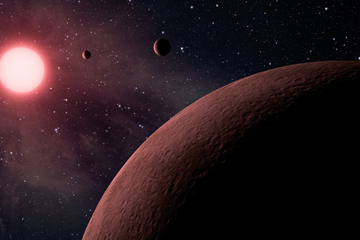 This artist's concept depicts the newfound planetary system KOI-961, which contains three alien planets smaller than Earth. The exoplanets circle their red-dwaf host star at very close distances, so they're likely too hot to host life.

AUSTIN, Texas - Astronomers have discovered the three smallest alien planets yet, including one that's just the size of Mars.
The alien worlds, detected using publicly available data from NASA's Kepler mission, are 0.78, 0.73 and 0.57 times the diameter of Earth, respectively; the smallest one is roughly Mars-size.


The three exoplanets orbit a red dwarf star known as KOI-961, which is just one-sixth the size of our sun and is located 120 light-years away, in the Constellation Cygnus (The Swan).
"This is the tiniest solar system found so far," said principal investigator John Johnson of the California Institute of Technology in Pasadena. "It's actually more similar to Jupiter and its moons in scale than any other planetary system. The discovery is further proof of the diversity of planetary systems in our galaxy."

The three planets orbit very close to their star, just 0.6 to 1.5 percent the distance from Earth to the sun. It takes each of them less than two days to zip around KOI-961, researchers said.

"It's almost like you took a shrink gun and zapped a planetary system, the whole thing, including the sun," Johnson told SPACE.com. [Gallery: Smallest Alien Planets Ever Seen]
All three exoplanets are thought to be rocky like Earth. However, their closeness to their star makes them too hot to be in the habitable zone, the area around a star neither too hot nor too cold for liquid water to exist on the surface.
"The surface temperatures of these planets range from 720 Kelvin (836 degrees F) to 450 Kelvin (350 degrees)," Johnson said.
Kepler finds planets using a technique known as the transit method. It watches for tiny dips in a star's brightness caused when a planet crosses the face of, or transits, the star, blocking some of its light.
If KOI-961 were larger and brighter, Kepler would not have been able to flag the brightness dips caused by the three newfound planets' transits.
"If there were small planets like these around a star more like our sun, there's no chance we'd find them," Johnson said.
An amateur astronomer, Kevin Apps, tipped the researchers off to the fact that KOI-961 was virtually identical to the well-studied Barnard's Star. Knowing details about this more famous star allowed the scientists to quickly pinpoint the properties of KOI-961 and its planets.
"I can't express how excited I am to find a Mars-sized planet," Johnston said. "It's already so hard finding something the size of the Earth."

Many planets around red dwarfs?

Red dwarfs are the most common kind of star in the Milky Way. The discovery of three rocky planets around one red dwarf suggests that our galaxy might be teeming with similar worlds, researchers said.
"These types of systems could be ubiquitous in the universe," said study lead author Phil Muirhead, also of Caltech. "This is a really exciting time for planet hunters."
The three tiny exoplanets add to an impressive list of recent discoveries by Kepler. Last month, astronomers using the prolific instrument announced the discovery of the first two Earth-size alien planets, as well as one slightly larger than our home planet that resides in its star's habitable zone.
To date, Kepler has found about 35 alien planets, but it's flagged an additional 2,300 exoplanet candidates that await confirmation by follow-up studies. Kepler scientists have estimated that at least 80 percent of these potential planets will end up being the real deal.
The scientists detailed their findings today (Jan. 11) here at the annual meeting of the American Astronomical Society.
Source :  http://www.space.com/