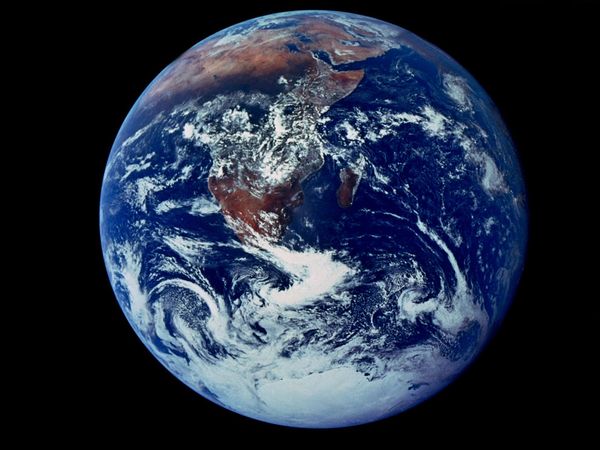 Photograph courtesy NASA Johnson Space Center
This famous "Blue Marble" shot represents the first photograph in which Earth is in full view. The picture was taken on December 7, 1972, as the Apollo 17 crew left Earth’s orbit for the moon. With the sun at their backs, the crew had a perfectly lit view of the blue planet.

1001Best Wallpapers
Milestones in Space Photography - First Photos
If You Want to See The Photos in Full Screen Just press (click) any Photo You Like.

First Photo of Earth From the Moon
Photograph courtesy NASA/Lunar Orbiter 1
This photo reveals the first view of Earth from the moon, taken by Lunar Orbiter 1 on August 23, 1966. Shot from a distance of 236,000 miles (380,000 kilometers), this image shows half of Earth, from Istanbul to Cape Town and areas east, shrouded in night.

First Color Photo of Earthrise
Photograph by NASA/Apollo 8 astronaut William A. Anders
When Apollo 8 was deployed in 1968, its sole photographic mission was to capture high-resolution images of the moon’s surface, but when the orbiting spacecraft emerged from a photo session on the far side of the moon, the crew snapped this, the most famous shot of the mission. Dubbed "Earthrise," this view of the Earth rising from the horizon of the moon helped humans realize the fragility of their home.

First Photo of Earth From Mars
Photograph courtesy NASA/JPL/Main Space Science Systems
The first Martian's-eye-view of Earth and its moon was captured on May 8, 2003, by a aboard NASA’s Mars Global Surveyor craft. Shot from Mars at a distance of 86 million miles (139 million kilometers) from Earth, the image reveals an illuminated slice of Earth’s Western Hemisphere—as well as a celestial perspective of the world in which we live.

Photograph courtesy NASA/Camera 2 on Viking 1
Shortly after Viking 1 landed on Mars on July 20, 1976, its Camera 2 captured the first photograph ever taken of the planet’s surface. This 300-degree image shows Chryse Planitia, the flat, low-lying plain of Mars’s northern hemisphere, littered with mechanical parts from the lander and rocks that range from four to eight inches (10 to 20 centimeters) across.

First Photo of Mars's Surface
Photograph courtesy NASA/Viking 1
On July 20, 1976, spacecraft Viking 1 captured this, the first photograph ever taken of the surface of Mars. The photo shows one of three dust-covered footpads of the craft resting on Mars’s dry, rock-littered surface. Cameras strapped on either side of Viking 1’s lander helped scientists calculate distances on the surprisingly Earthlike surface of the red planet.

First Color Photo From Venus
Photograph courtesy NASA/Venera 13 Lander
In spite of surface temperatures of 900 degrees Fahrenheit (482 degrees Celsius) and atmospheric pressure 92 times that of sea level on Earth, Russian spacecraft Venera 13 captured the first color photos of the desertlike surface of Venus on March 1, 1982. This 170-degree panorama, which includes the zigzag lip of the lander at bottom, was created using blue, green, and red filters.

First Photo From Titan
Photograph courtesy ESA/NASA/JPL/University of Arizona
The first photos taken of the surface of Saturn's moon Titan reveal a flat expanse strewn with grapefruit-size boulders, as shown in this composite view paired with a similar shot of the surface of Earth's moon. On January 14, 2005, the Cassini-Huygens mission, a joint U.S.-European venture, captured 1,100 photos during a two-hour descent through Titan’s murky atmosphere.

First Photo of Exoplanet
Photograph courtesy ESO/European Organization for Astronomical Research in the Southern Hemisphere
This 2004 photograph made by the European Southern Observatory shows the first known photo of an exoplanet, or a planet beyond our solar system. The red orb at bottom left is a young planet, similar in composition to Jupiter, orbiting a brown dwarf, a dim, failed star that is probably 42 times less massive than the sun. An infrared camera, which reacts to heat rather than light, shot these photos from a distance of some 230 light-years.

First Photo of the Sun
Photograph courtesy National Science Foundation, High Altitude Observatory
Taking advantage of a relatively new technology, the daguerreotype, French physicists Louis Fizeau and Leon Foucault made the first successful photographs of the sun on April 2, 1845. The original image, taken with an exposure of 1/60th of a second, was 4.7 inches (12 centimeters) in diameter and captured several sunspots, visible in this reproduction.

Deepest Visible-Light Photo of Cosmos
Photograph courtesy NASA, ESA, S. Beckwith (STScI) and the HUDF Team
Representing 800 exposures taken during 400 Hubble Space Telescope orbits around Earth from September 2003 to January 2004, this galaxy-studded photo is the deepest visible-light image of the cosmos ever taken. Nearly 10,000 galaxies are represented in this view, dubbed the Hubble Ultra Deep Field, which scientists describe as peering through an 8-foot-long (2.4-meter-long) straw to get a deep core sample of the universe.

Moon Footprint
Photograph courtesy NASA
A symbol of mankind’s giant leap, this photo of man’s small step—astronaut Buzz Aldrin’s—shows one of the first human prints left on the surface of the moon. Aldrin took this photo of his own footprint during NASA’s 1969 Apollo 11 mission.

First Photos of Another Planet's Surface
Photograph courtesy NSSDC/GSFC/NASA
From June to October 1975, Russian space probe Venera 9 became the first craft to orbit, land on, and photograph Venus. Venera 9 consisted of two main parts that separated in orbit, an orbiter and a lander. The 5,070-pound (2,300-kilogram) orbiter relayed communication and photographed the planet in ultraviolet light. The lander entered the Venusian atmosphere using a series of parachutes and employed a special panoramic photometer to produce 180-degree panoramic photos of the surface of the planet.